The laboratory for neuroimaging is headed by Prof. Dr. Christine Ecker, who joined the GU as Heisenberg Professor in December 2015. Research project within the team focus on the analysis of human Magnetic Resonance Imaging (MRI) data with the aim of developing biomarkers that can be leveraged to (1) understand the neurobiological underpinnings of complex neurodevelopmental conditions such as Autism Spectrum Disorder (ASD) and Attention Deficit Hyperactivity Disorder (ADHD), and to (2) provide targets for developing and monitoring novel pharmacotherapies and interventions. For this purpose, we acquire a variety of image modalities that include structural MRI, Diffusion Tensor Imaging (DTI), and resting state functional neuroimaging (rsfMRI), which are analyzed using automated pipelines and software packages that include FreeSurfer, FSL, and software developed in-house or by collaborators. In addition to conventional statistical techniques, we also employ multivariate pattern classification techniques for making a prediction on the individual- or case-level based on neuroimaging data.

Research projects within the group are funded by the German Research Foundation (DFG), the Medical Research Council UK (MRC), and the EU.

For a full list of publications please see https://www.researchgate.net/profile/Christine_Ecker. 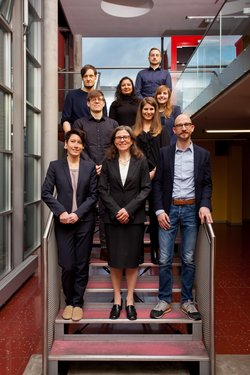 Autism Spectrum Disorder (ASD) is a heterogeneous neurodevelopmental condition affecting over five million people within the european Union. The combination of core symptoms (i.e. deficits in social-communication and repetitive/restricted behaviours and interests) and common comorbidities (e.g. epilepsy and depression) significantly affects the quality of life and life-span of affected individuals. Currently, there are no effective drug treatments for these core symptoms. Key factors that have hampered progress include (i) a limited understanding of the underlying pathophysiology, (ii) a lack of successful translation from animal models to humans, (iii) testing of drugs with specific actions in biologically heterogeneous  samples, and (iv) conventional clinical trial designs. The aim of this project is therefore to apply a precision medicine approach to ASD, and improve patient outcomes by tailoring treatments to a patient’s biological profile. To do so, we will align global resources to validate and qualify stratification biomarkers from infancy to adulthood, to develop objective outcome measures that can be utilized in clinical trials, and to translate molecular mechanisms and drug effects between preclinical models and particular subtypes of ASD.

The aim of the project is to evaluate the efficacy of transcranial direct current stimulation (tDCS) as an innovative, effective and safe treatment alternative for neuropsychiatric disorders in children and adolescents. First, in two phase-IIa randomized, double blind, sham-controlled clinical trials in Attention Deficit Hyperactivity Disorder (ADHD) and Autism Spectrum Disorder (ASD), we will establish standard operating procedures for the application of tDCS in the clinical setting by targeting brain regions that mediate the core symptoms of ADHD and ASD. Second, we will examine the impact tDCS has on brain development and functioning using state-of-the-art neuroimaging and neurophysiological techniques, and to establish the neurobiological mechanisms that mediate response to tDCS. Last, we will develop innovative personalized home-based treatment options for tDCS. Our research team heads WP6, which is concerned with the prediction of the individual’s response to tDCS using neuroimaging biomarkers.

This project aims to establish the neurobiological mechanisms mediating brain maturation from late childhood to early adulthood in ASD, and to develop early adolescence biomarkers that could predict clinical outcomes during late adolescence. Moreover, we aim to establish the extent, to which the cortical pathology and neurodevelopmental trajectory of ASD during adolescence is modulated by biological sex, and to examine potential neuroprotective factors in adolescence that could modulate the severity of autistic symptoms in early adulthood. The outcomes of our proposed work will provide important novel insights into the neuropathology of ASD during adolescence, and elucidate gender-differences in the neurobiological and clinical ASD phenotype, which may inform future approaches to diagnosing and treating ASD during adolescence. Most importantly, however, our research will significantly contribute to the development of early in vivo biomarkers for ASD that could be utilized in the prediction of clinical outcomes later on, and thus adds to ongoing global research efforts towards translating research findings into clinical practice.

This project is funded by the German Research Foundation (www.dfg.de) under grant agreement EC480/1-2. The duration of the project is 36 months (2015-2018). For additional information please contact: Anke Bletsch (Anke.Bletsch@kgu.de or Caroline Mann (Caroline.Mann@kgu.de)

This is a collaborative project with the Institute of Psychiatry, Psychology and Neuroscience (IoPPN) at King’s College, London, focusing on children with conduct problems (CP). The un